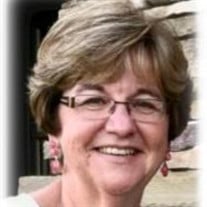 Evelyn Louise Esker, 72 years, of Saint Petersburg, FL, passed away on December 30, 2021 at St. Anthony's Hospital, Saint Petersburg, FL. Evelyn was born on September 10, 1949, in Piedmont, Missouri. Her parents were Norman and Kathleen (nee Twidwell) Barker. Louise was the baby of the family. She had two older siblings Chester Barker and Barbara Thornbrugh. In her adolescence she grew up in East St Louis, Illinois until the family relocated to Columbia, Illinois at the age of 13. Louise enjoyed playing the piano, dancing, and cheerleading. She graduated from Columbia High School in 1967 and then worked for the United States Government. She officially retired from the Defense Mapping Agency in 2000. Louise met her husband Roger Paul Esker at the Waterloo Homecoming in 1968. They were instantly inseparable and married on September 6, 1969. Her daughter Lisa Michele Esker was born in 1971 and was the center of Louise’s life. Although Louise only had one child, she was a second mother figure to many, and she was thrilled to finally become a grandmother in 2018. One thing that everyone knew about Louise and Roger is that they moved often. They would buy or build a home and within a few years sell it to search for another one. Over the 52 years they were married, they owned 19 different residences and lived in several different states, including Illinois, Texas, and Florida. For each home, Louise took pride in decorating and furnishing each home. Her home was always spotless and filled with home cooked meals and goodies. Louise and Roger had most recently moved back to St Petersburg, Florida to be near their daughter Lisa and her sister Barbara. She loved shopping for new clothes, going to the beauty shop, spending time with family and the weekly dinners hosted at Lisa’s home. Louise had a very strong relationship with the Lord and read the bible daily. She used her faith to offer advice and support to many. Louise will live on in the hearts of many who will always remember vibrant bright smile and laughter. Visitation will be Sunday, January 9, 2022, 3:00 pm - 7:00 pm, at Leesman Funeral Home, Columbia, IL, Funeral Services will be held at 11:00 am, Monday January 10, 2022 at the funeral home, with Rev. William Groennert officiating. Interment will follow in the Evangelical St. Paul Cemetery, Columbia, IL. In lieu of customary remembrances, the family requests with gratitude that memorial contributions be directed to: Parkinson's Disease Foundation 1359 Broadway, Ste: 1509, New York, NY 10018, or , St. Jude Children's Research Hospital, 501 St. Jude Pl., Memphis, TN 38105 . For more information, please access our website, www.leesmanfuneralhome.com. Leesman Funeral Home, Columbia, IL, handled arrangements.

The family of Evelyn Louise Esker created this Life Tributes page to make it easy to share your memories.

Send flowers to the Esker family.