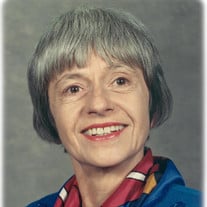 Elizabeth “Betsy”, nee Browning, Stuart left this world to join her husband and parents March 12, 2020. She was born December 12, 1934 in Savannah, IL. She grew up in Iowa and was so fond of recalling happy memories of her youth with her older brother and her younger sister. She studied education at Missouri Valley College and was a member of Alpha Xi Delta Sorority. She fell in love with James "Jim" Stuart on campus, and they married soon after graduation. She was an elementary school teacher before becoming a full time mother. Betsy and Jim were blessed with two children, Steve and Kelly. Betsy devoted her life to be the best mom for her family with awesome chocolate chip cookies and carnivals in the yard. She was an active volunteer for Baptist Vacation Bible School and Citizens for Better Education. She often said she was “just a housewife” but she was more. She was a practical and witty woman who was her family’s foundation. After her children were grown, she enjoyed selling real estate with Century 21 as well as her role as a collectible and antiques entrepreneur at the Belleville Fairgrounds. She enjoyed the simple things in life such as a vanilla ice cream cone or finding a yard sale bargain and did not like fuss or pretentiousness. She was a strong woman and did hesitate to voice her opinion to stand up for the underdog or when something was not just. She was a proud grandma and will be dearly missed. Surviving are her son, Steve (Tricia) Stuart; daughter, Kelly (Greg Moss) Stuart; grandson, Wilson Stuart and sister, Barbara (Chuck Folkert) Browning, along with other relatives and friends. She was preceded in death by her husband, Jim Stuart; parents, Robert and Edna, nee Rogers, Browning and brother, Robert Browning. A private memorial will be held at a later date. In lieu of customary remembrances, the family requests with gratitude that memorial contributions be directed to: Hope Christian Church - Food Pantry, 9273 Coach Stop Rd., Columbia, IL, 62236 or American Heart Association, 460 N. Lindbergh Blvd., St. Louis, MO, 63141. For more information, please access our website, www.leesmanfuneralhome.com. Lawlor Funeral Home, Columbia, IL, handled arrangements.

Elizabeth &#8220;Betsy&#8221;, nee Browning, Stuart left this world to join her husband and parents March 12, 2020. She was born December 12, 1934 in Savannah, IL. She grew up in Iowa and was so fond of recalling happy memories of her youth... View Obituary & Service Information

The family of Elizabeth "Betsy" Stuart created this Life Tributes page to make it easy to share your memories.

Send flowers to the Stuart family.