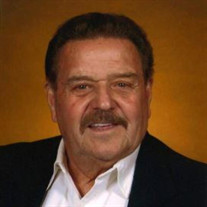 Edward H. “Bud” Dudley, 86, of Dupo, fortified with the sacraments of Holy Mother Church was granted eternal rest by his Heavenly Father at 10:55 PM, Friday, June 4, 2021 at his home. He was the son of Henry and Josephine (Cleaton) Dudley and loving husband and friend of 41 years of Sharon Wainwright-Dudley, beloved father of Edward H. “Skip” (Marcella) Dudley, III, of Bardwell, KY and Lance E. (Karen) Dudley of Waterloo. He was blessed with grandchildren: Kim (David) Bosler, Gary (Bobbie) Dudley, Heather (Patrick) Seymour, Megan Dudley, Dane Dudley, Krista Dudley and great grandpa to Bailey, Reese, Justin, Kierstyn, Ashtyn, Skylar, Elena, Dallas and Dakota. He was a loving brother to Richard (Dixie) Dudley and John Dudley, dear brother in law of John (Paula) Wainwright, uncle, great uncle, Godfather and dear friend to many. He was preceded in death by his parents, his first wife and mother of his children, Nancy; a grandson, Edward H. “Rhyen” Dudley”, IV; sister and brother-in-law- Alice (Lendell) Phelps; mother-in-law, Billie Ruth Wainwright and great nephew, Kaleb A. Nadler. Bud was born July 19, 1934, in Williamson, IL and grew up in Washington Park, IL. He went to work at an early age and retired in 2000 after 50 years of service in the Laborer’s International Union, Local #100. He proudly served in the US Coast Guard Reserves as a Boatswains Mate. He played an active part in his sons’ lives as a baseball coach and motocross enthusiast. He was a member of Holy Family Catholic Church. Over the years, he served on several committees, was a parish council member and was an extraordinary eucharistic minister. He loved boating, water skiing and spent much time, in his early years, at Lake of the Ozarks. He was a member of Prairie Du Rocher Saddle Club and enjoyed trail riding. His most recent hobby, at age 86, was motorcycling. He was an excellent dancer and won a few swing dance competitions with his wife, Sharon. Although his favorite genre of music was country and western, he also enjoyed the symphony and musical theatre. He was a lover of animals - large and small. He cared for many throughout his lifetime; horses, dogs, cats, chickens, geese and his mule, Shug. He was truly blessed to live such a long, fulfilling and active life. In following with his wishes, Bud will be cremated, with a private service being held at a later date. Memorial arrangements were entrusted to Leesman Funeral Home in Dupo. In memory of Bud, memorial donations may be made to the American Heart Association, Alzheimer’s Association, Operation Smile or Family Hospice (Belleville). For more information please visit www.leesmanfuneralhome.com

The family of Edward H. "Bud" Dudley created this Life Tributes page to make it easy to share your memories.

Send flowers to the Dudley family.