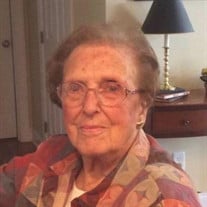 Dorothy Jean Miller, nee Dinges, 97, passed away peacefully with family by her side Friday, July 23,2021 at Levine & Dickson Hospice House, Huntersville, NC. Dorothy was a longtime resident of Millstadt, IL, having spent the last several years living in North Carolina near two of her five children. She was born June 11, 1924, in Belleville, IL. She was raised in Belleville, the daughter of Arthur and Minnie, nee Lindauer, Dinges. Dorothy attended Belleville Township High School and had a brief career working at Scott Air Force Base before the “city” girl met and fell in love with the farmer’s son from Millstadt, IL. Thus, started the nearly 73-year union of Dorothy and her late husband, Lester G. Miller, who proceeds her in death since July 25, 2015. They married in 1943 raising and educating four daughters and one son together. Dorothy was as comfortable behind the wheel of a tractor, helping on the family farm, as she was sitting down at her sewing machine. She was a seamstress for her daughters as they grew, anything from school dresses or Easter attire to a prom or homecoming dress. She was very handy with her needles. Quilting and cross stitching were favorite pastimes. Many of her handiworks are and will be family heirlooms. The Millers enjoyed planting and growing large gardens with Dorothy canning green beans, pickles, red beets, tomatoes, peaches, and any other thing she could get her hands on. She also enjoyed cooking and baking. Specialties were her German potato salad, banana, and coconut cream pies and of course her hot milk sponge cake, most often turned into a family favorite, peanut squares. Dorothy spent countless hours participating in her children’s activities while they were growing up. Anything from 4H, PTA, band parent’s organizations, scout troop leader, creating cheerleading or majorette uniforms, watching her son play sports, and much more, she shared her time. She was the glue that helped to hold it all together. She also enjoyed some time for Dorothy at her Thursday night ladies bowling league at the now demolished Millstadt Bowl. Dorothy and Lester remained very active into their later years. They grew and showed prize winning Dahlias in their yard for many years; he the grower, she the arranger. As members of the St. Louis Dahlia Society, they delighted in sharing their flowers with local businesses around town. They received many prize-winning awards for their flowers, growing over 50 different varieties. They propagated and developed their own variety of dahlia known as the Autay Chipper, named after their four youngest grandsons. She and Lester were charter members of the Millstadt Sister City Organization. They spent countless volunteer hours helping to get the group up and running; making potato pancakes at the Millstadt Homecoming and helping to make sure the Weihnachts Fest of Millstadt was a big success. They enjoyed many trips to Germany serving as goodwill ambassadors for the town as well as hosting their German friends in their home when they came to visit the US. The Millers were very active in masonic organizations. Dorothy was active in Order of Eastern Star and Daughters of the Nile, having a 50 plus year membership in both. Dorothy and Lester enjoyed their membership and participation in the congregation of St. Paul’s UCC in Floraville, IL for many years. Dorothy will be remembered by those who knew her as a resilient, resourceful, and generous woman. She is preceded in death by her parents, her husband Lester, son in law George Jenkins, her sister and brother in law Ethel Mae (Frederick) Mueller, and her brothers and sister in laws Erwin (Mildred) and Willard (Shirley) Dinges. There are also many aunts, uncles and cousins who proceed her. Dorothy remained the last surviving member of her generation of both the Lindauer and Dinges families. Surviving to remember her are five children, Joyce Ann (Chuck) Ehr, Dallas, TX: Carolyn Jenkins, Palos Heights, IL: Marsha (Bob) Hoffmeister, The Woodlands, TX: Vicki (Bruce) Ellis, Huntersville, NC: Douglas (Sherry) Miller, Elon, NC. Dorothy is grandmother to nine grandsons, John (Kristina) Ehr, Dallas, TX: Mark Ehr, Dallas, TX: Daniel (Kimberly) Ehr, Pflugerville, TX: Grant (Cyndi) Hoffmeister, Littleton, CO : Tyler Hoffmeister, Denver, CO: Austin Ellis, Huntersville, NC: Taylor Ellis, Charlotte, NC: Charles (Lana) Miller, Nashville, TN: Philip Miller, Greenville, SC. She is also great grandmother to one great granddaughter Amanda Ehr, Dallas, TX: and five great grandsons Logan Ehr, Dallas, TX: Kingston and Grayson Ehr, Pflugerville, TX: Robby and Bennett Hoffmeister, Littleton, Co. Her brother-in-law Wilbur Miller, Belleville, IL also survives as well as several nephews. Memorials are requested to Shriners Hospital for Children-St. Louis, Attn: Development Office, 4400 Clayton Ave. St. Louis, MO 63110. The family would like to acknowledge the Levine & Dickson Hospice House in NC for allowing her transition to be one of peace. Acknowledgements are owed to Raymer-Kepner Funeral Home, Huntersville, NC. Private graveside services will be held for the family with Pastor Matt Friz, officiating. Arrangements handled by Leesman Funeral Home, Millstadt, IL. Dorothy will be laid to rest beside Lester in Mt. Evergreen Cemetery, Millstadt, IL. For more information, please access our website, www.leesmanfuneralhome.com. Arrangements were handled by Leesman Funeral Home.

The family of Dorothy Jean Miller created this Life Tributes page to make it easy to share your memories.

Send flowers to the Miller family.