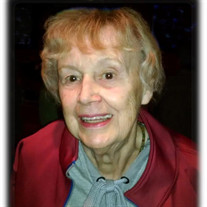 Doris S. Schmersahl, 87 years old, of Columbia, IL, passed away on September 5, 2020. She was born January 25, 1933, in Belleville, IL, daughter of the late Elten and Ottilda, nee Beckerle, Schorb. She was married to the late Richard B. Schmersahl. They were married February 6, 1954, in Columbia, IL. He had passed away on February 7, 1991. Doris was defined by her energy, her work ethic and her effervescent personality. She was a fixture at the Monroe County Courthouse, serving as court reporter and court administrator. Over a 50 year span she worked closely with Judge Maeys, then Judge Jacobson and finally Judge Dennis Doyle. Doris served as president of the Columbia Public Library Board and was a leader of the Friends of the Library, raising the funds to construct the current Columbia Library. She was a founder and chairperson of the Versteigerungfest (Library Auction Festival) which, along with a book store and book fairs paid off the library construction debt. Doris started Tela Tunes (singing telegrams) with Eileen Traughber as singer. A consummate Kloepper player she was the last remaining member of the Amazons Kloepper Club and a current member of the Columbia Woman’s Kloepper Club. Doris enjoyed crossword puzzles and reading and treasured her time with the St. Paul Book Club. Doris loved music and was outstanding on the accordion. She played at parties, dances and in living rooms and never met a polka she didn’t like. Her house was filled with art and she took great pride in her friendships with artists Norma Malerich and Amour Krupnik. Doris was a lifelong member of Immaculate Conception Church and a proud graduate of St. Theresa’s Academy. Surviving are her two sons, James Schmersahl, and Mark (Linda) Schmersahl; grandchildren, Nathan, Emilie, Rick, and Ethan Schmersahl; sister-in-law, Elaine Schorb; nieces, Lisa (Terry) Meyer, Laura (Mark) Byrne-Harris, and Christine (Kevin Schmoll) Schorb, great-nieces and great-nephews, along with other relatives and friends. She was also preceded in death by her brother, Eugene J. Schorb. Due to public health issues regarding Covid-19, all services will be private. In lieu of customary remembrances, the family requests with gratitude that memorial contributions be directed to: The Eugene Schorb - Immaculate Conception School Education Fund, 411 Palmer Road, Columbia, IL, 62236, or, Columbia Public Library Fund, 106 N. Metter Ave., Columbia, IL, 62236 . For more information, please access our website, www.leesmanfuneralhome.com. Lawlor Funeral Home, Columbia, IL, handled arrangements.

Doris S. Schmersahl, 87 years old, of Columbia, IL, passed away on September 5, 2020. She was born January 25, 1933, in Belleville, IL, daughter of the late Elten and Ottilda, nee Beckerle, Schorb. She was married to the late Richard B. Schmersahl.... View Obituary & Service Information

The family of Doris S. Schmersahl created this Life Tributes page to make it easy to share your memories.

Send flowers to the Schmersahl family.