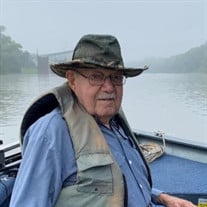 Donavon Joseph DeRousse, 89, of East Carondelet, IL, passed away on September 25, 2021, at Mercy South Hospital, with his loving family by his side. He was born in Kaskaskia, IL on September 14, 1932, and was the son of the late Louis and Margaret (Louvall) DeRousse. He married Elizabeth (Betty) Jane Schremp on January 30, 1954 in Claryville, MO, and she survives. Don was a veteran of the U.S. Army and served during the Korean War. He was employed by the St. Louis Testing Lab, where he retired after 33 years of dedicated service. Don, to say the very least, was a fun-spirited fellow who had quite the zest for life. He was an avid outdoor enthusiast…the fish and wildlife feared him. He is survived by his loving wife, Betty, of 67 years, and three children; Steve (Lane) DeRousse of Alton, IL, Vanessa (Bo) Buechler of Waterloo, IL, and Veronica Jahr of St. Charles, MO, seven grandchildren; Jackie (Ryan) Voss, Rene Hughes, Sarah, Scott, and Kaleb Buechler, and Brittney and Casey (Lindsey) Jahr, five great-grandchildren, with another one on the way, a brother, Lawrence (Betty) DeRousse, three sisters; Yvonne Heberlie, Virginia Blythe, and Margie Ann Welker, sister-in-law, Anna DeRousse, many nieces and nephews, as well as other extended family and friends. He was preceded in death by his parents, his beloved son, Daniel, four brothers; Gerald DeRousse, Louis DeRousse, David DeRousse, and Robert DeRousse; and two sisters; Carol Johnson and Helen Basler. Visitation will be held September 30, 2021, from 4PM – 8PM at Leesman Funeral Home in Dupo, IL. Mass will be held October 1, 2021, at 10AM with an one hour visitation prior, at the Sacred Heart Church, 124 S. 3rd St, Dupo, IL with Father Linus Umoren officiating. Internment will follow at the Mount Hope Cemetery, 2001 West St. Joseph St., Perryville, MO. In lieu of customary remembrances, the family requests, with gratitude, that memorial contributions be directed to the Leukemia and Lymphoma Society, PO Box 22324, New York, NY 10087, and Sacred Heart Catholic Church, P.O. Box 35, Dupo, IL 62239 for Masses. Also, a gentle kindness to another would warm Don’s soul, and make a wonderful, thoughtful memory to honor him. For more information, please access our website, www.leesmanfuneralhome.com. Arrangements were handled by Leesman Funeral Home.

Donavon Joseph DeRousse, 89, of East Carondelet, IL, passed away on September 25, 2021, at Mercy South Hospital, with his loving family by his side. He was born in Kaskaskia, IL on September 14, 1932, and was the son of the late Louis and Margaret... View Obituary & Service Information

The family of Donavon Joseph DeRousse created this Life Tributes page to make it easy to share your memories.

Send flowers to the DeRousse family.