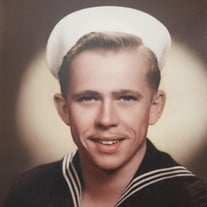 Red Bud- Donald J. Mayberry, Sr., 84, of Red Bud, passed away at 8:28 PM, Wednesday, March 31, 2021 at his home. Donald was born on September 22, 1936 in East St. Louis, IL to Warren and Florence (Stumpf) Mayberry. He married Mary Lou Ann Sievers in Red Bud on July 22, 1961 and she survives of Red Bud. He was a proud veteran of the United States Navy. He served during peacetime and was honorably discharged. He was a hardworking man who spent 20 years working as a police officer for Ruma and 6 years in Red Bud. He also retired from Menard Correctional Facility in Chester after 20 years of service as a corrections officer. In his spare time, he enjoyed travelling to different places with his beloved Mary, watching documentaries about the Korean War and World War II and spending time outside with his family camping, metal detecting, mushroom hunting and fishing. He also enjoyed winemaking and rock hunting throughout the area. He was a Christian man and a proud member of the NRA. He was a personable man who never met a stranger and he will be missed by his family and friends. He is survived by his wife- Mary Mayberry of Red Bud, son- Donald Mayberry, Jr of Pulaski, daughter- Deborah Riechmann of Fairview Heights, six grandchildren- Brandon and Derek (Megan) Mayberry, Danielle (David) Dannenberg, and Colton, Cameron and Celsea Riechmann, six great grandchildren and numerous nieces, nephews and cousins and friends. He was preceded in death by his parents, son- Bobby “Bozo” Mayberry, brother and sister-in-law- Allan and Rosemary Mayberry, ½ brother- Warren Mayberry, Jr and nephew- Warren Mayberry. A memorial visitation will be held at from 10:00 AM until 1:00 PM, Tuesday, April 20, 2021 at Leesman Funeral Home in Red Bud. A graveside memorial service will be held at 2:00 PM, Tuesday, April 20, 2021 Jefferson Barracks National Cemetery in St. Louis, MO. Rev. Cory Hartz will officiate. Military rites will be performed at graveside by members of the United States Navy military honor guard. Inurnment will follow. Memorial arrangements were entrusted to Leesman Funeral Home in Red Bud. Memorial donations are suggested to the family and will be accepted at the funeral home or at the graveside. For more information or to sign the memorial guest register, please visit www.leesmanfuneralhome.com

The family of Donald J. Mayberry created this Life Tributes page to make it easy to share your memories.

Send flowers to the Mayberry family.