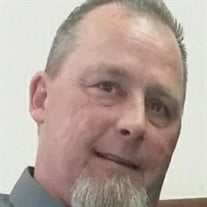 Donald R. "Hank" Goforth, 52, of Cahokia, passed away on May 18, 2020 at Memorial Hospital of Belleville. He was born September 14, 1967, in Centreville, IL to Paul and Ethel "San-Dee" (Hudgens) Goforth, Sr. He married Jennifer Findley on New Years Eve 2009 in Cahokia. He enlisted in the United States Navy and served his country honorably until his discharge in 1991. Donald began his career as an assemblyman for Chrysler Motors in Fenton, MO. Later he owned DJ's Doughnut Shop in Cahokia and then McBride's Place in Dupo. He was a member of the Prophecy Charity Riders of Dupo and the UAW Local #110 and #136 and the local Veterans Committee Local 110. He was an avid motorcycle rider. He enjoyed spending time outdoors, hunting and fishing and was a gun enthusiast who had several pets. He was a tenacious man with a wry sense of humor who enjoyed spending time with his family and friends. Surviving are his wife, Jennifer Goforth, his step-children, Joshua Constantine II and Breanna Constantine, two Granddaughters, Addison and Serena, his sister, Patricia (Shannon Vaughn) Whitmore, mother in law; Linda Stevens, his nieces and nephews, Alexis, John, Quinten, Morgan, Austin, Abbi, Conner and Gracelyn along with other relatives and friends. He was preceded in death by his grandparents, parents and brothers- Paul Goforth Jr. and Patrick Mezo. Due to the current Covid 19 restrictions private services will be held. Interment will be in the Valhalla Gardens of Memory, Belleville. In lieu of customary remembrances, the family requests with gratitude that memorial contributions be directed to the Family. For more information, please access our website, www.leesmanfuneralhome.com. Arrangements were handled by Leesman Funeral Home - Dupo.

Donald R. "Hank" Goforth, 52, of Cahokia, passed away on May 18, 2020 at Memorial Hospital of Belleville. He was born September 14, 1967, in Centreville, IL to Paul and Ethel "San-Dee" (Hudgens) Goforth, Sr. He married Jennifer Findley on... View Obituary & Service Information

The family of Donald R. "Hank" Goforth created this Life Tributes page to make it easy to share your memories.

Send flowers to the Goforth family.