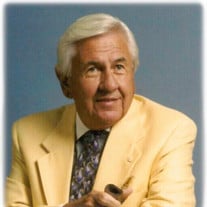 Donald "Don" Julius Barlow, 92, of Columbia, IL, died Friday October 9, 2020 at his home. He was born February 11, 1928, in Columbia, IL. The son of the late Bertram Barlow and Edna, nee Coulter, Daab. Mr. Barlow is survived by his wife, Marian Sue, nee Greenlee, Barlow, whom he married August 3, 1985. He is also survived by his daughter, Stacy (Tim) McKenzie of Fenton, MO.; grandchildren, Sara Carr and Kelly Carr; step-grandchild, Jordan McKenzie; and nieces and nephews. Besides his mother and father, Mr Barlow was preceded in death by his stepfather, Johnny Daab: a brother in infancy, Ralph Barlow; and two sisters, Marjorie O'Brien and Ruth Jackson. Mr. Barlow was a graduate of Columbia High School. He retired in 1998 at age of 70 as an investment advisor for A.G. Edwards & Co. He began his career in the financial service business with Investors Diversified Services (IDS) and had owned and operated Bert's Tavern in downtown Columbia. As a teenager, Mr. Barlow worked at his stepfather's drug store and as a "printer's devil" at the Clarion Printing Co. When he was two years old, Don's life was dramatically altered as a result of a broken leg in a fall. He underwent extensive treatment that saved his leg at Shriners Hospital for Children in St. Louis. This injury began a life-long connection with the hospital and Shriners. He was among the founders of the Rotary District 6510 Belize Children's Program 43 years ago, and remained active in the treatment program facilitated by the hospital until his death. Mr. Barlow was a Rotary Paul Harris Fellow and a long-time member of the Columbia Rotary Club and later the Belle-Clair Rotary. He was a dedicated member of the Waterloo Country Club, where he served on the board of directors as membership chairman and published a book on the club's history. The club's annual golf championship match play is named in his honor. Despite walking with a distinct limp because of his childhood injury, Mr. Barlow refrained from accepting any kind of special accommodation, especially the use of handicapped parking spaces. He was active in sports throughout his life, participating in baseball, basketball, golf, tennis, and bowling. In retirement, he enjoyed fly fishing and annual trips to Montana. He was a loyal member and supporter of the St. Louis Browns Fan Club and was featured in a commemorative video about the team. A lover of big band jazz music, Mr. Barlow served as the host of a jazz radio show on KDHX-FM radio. He was especially fond of Stan Kenton's music, and had attended numerous jazz festivals. Visitation will be Wednesday, October 14, 2020, 4:00 pm - 7:00 pm, at Lawlor Funeral Home, Columbia, IL, and Thursday, October 15, 2020, 10:00 am - 11:00 am, Lawlor Funeral Home, Columbia, IL. Funeral Services will be held 11:00 am, Thursday, October 15, 2020 Lawlor Funeral Home, with Tim McKenzie officiating. Interment will follow in the Evangelical St. Paul Cemetery, Columbia, IL. In lieu of customary remembrances, the family requests with gratitude that memorial contributions be directed to: Shriner's Hospital for Children, 4400 Clayton Ave., St. Louis, MO, 63110, or Belize Children's Program, c/o Merilyn Hogan, 819 Drury Ave., Carbondale, IL 62902. For more information, please access our website,

The family of Donald J. Barlow created this Life Tributes page to make it easy to share your memories.

Send flowers to the Barlow family.