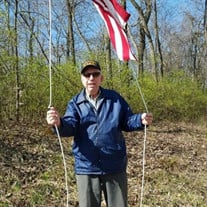 OBITUARY Cletus F. Buehler Cletus F. Buehler, 95 years of Red Bud, IL, passed away on November 13, 2019 at Red Bud Regional Care, Red Bud, IL. He was born August 27, 1924 in Hecker to Christ and Frieda (Birkner) Buehler. He married Ethel LaChance on October 25, 1949. She preceded him in death on April 25, 2019. He served his country bravely while enlisted in the US Army during WWII. He drove generals and various convoys to the front lines. As a result he received numerous injuries and was awarded the Purple Heart for bravery. Once honorably discharged, he returned home and began a long career as a truck driver for Anheuser Busch in St. Louis until his retirement. Cletus was an active member of St. John the Baptist Catholic Church in Red Bud, IL where he served as an usher. Surviving are his daughters, Cleta (Roger) Waldron & Sharon (Richard) Langrehr, numerous grandchildren & great grandchildren, along with other relatives and friends. He was preceded in death by his wife, Ethel Buehler, his son, Cyril Buehler and his grandchildren, Monte Waldron and Lisa Domer and great grandson- Dagan Domer. The funeral Mass will be held 11:00 AM, Saturday, November 16, 2019 at St. John the Baptist Catholic Church in Red Bud. Father Dennis Schaefer will officiate. Burial will follow at the St. John Catholic Cemetery, Red Bud, IL. Military rites will be performed at the graveside by the Red Bud Veterans of Foreign Wars post with assistance from the Illinois National Guard. Visitation will be from 9:30 AM until time of Mass, Saturday at St. John The Baptist Catholic Church in Red Bud. In lieu of customary remembrances, the family requests with gratitude that memorial contributions be directed to St. John the Baptist Catholic Church in Red Bud, IL or to the St. John Quilters. For more information, please access our website, www.leesmanfuneralhome.com. Arrangements were handled by Koch-Liefer Funeral Home, Red Bud, IL.

The family of Cletus Buehler created this Life Tributes page to make it easy to share your memories.

Send flowers to the Buehler family.