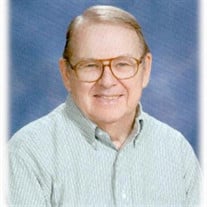 Bruce A. Soehnlin, 81 years, of Columbia, IL, passed away on October 16, 2020 at Mercy Hospital South, St. Louis, MO. He was born October 5, 1939, in East St. Louis, IL, son of the late Bernard A., and Julia Mae, nee Moffitt, Soehnlin. He was married to the late Marjorie, nee Deschamp, Soehnlin. They were married August 22, 1964, in East St. Louis, IL. She had passed away November 9, 1993. Bruce had retired from the Monsanto Corp. He was always civic-minded and charitable with his time and had been very active with the Columbia Jaycees, Columbia Lions Club, Columbia Sportman's Club, Meals on Wheels, the Lupus Foundation (where he had served on the Board of Directors), the American Cancer Society - Relay for Life, HIS KIDS, Highland, IL (where he oversaw the fishing program for years), and the Columbia Gymnastic Assoc. Bruce had served in the U.S. Army, and Army Reserves. He was an avid fisherman and wet his line whenever he had spare time. Surviving are two daughters, Sherri (Rodney) Duffy of Waterloo, IL, and Dawne (Jim) Hirsbrunner of Castle Rock, CO; son, Thomas (Terri) Soehnlin of Columbia, IL; sister, Sharon (Sam) Stimmel of Columbia, IL; four grandchildren, Jessica (Jeremy) Veath, Tony Soehnlin, Joe Hirsbrunner, and Nick Hirsbrunner; great-grandchildren, Tyler, Ethan, Dominic, and Emma, along with other relatives and friends. Due to the Covid-19 pandemic, all services will be private. Interment will follow in the Waterloo City Cemetery, Waterloo, IL. In lieu of customary remembrances, the family requests with gratitude that memorial contributions be directed to: Lupus Foundation of Missouri. For more information, please access our website, www.leesmanfuneralhome.com. Lawlor Funeral Home, Columbia, IL, handled arrangements.

The family of Bruce A. Soehnlin created this Life Tributes page to make it easy to share your memories.

Send flowers to the Soehnlin family.