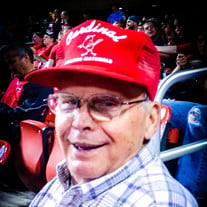 Alfred Lavern Prior, 85 years of Dupo, IL, passed away on October 9, 2019 at Wellstar North Fulton Hospital, Roswell, GA. He was born March 5, 1934, in Benton, IL. Lavern was a retired carpenter. He liked roller skating, stock car racing, boating and camping. Surviving are his wife, Katherine Prior, nee Pierce, his daughter, Cindy (Mark) Kaminsky, his son, Randall (Lori) Prior, his grandchildren, Steven (Sarah) Kaminsky, Dustin Kaminsky, Andrew Prior, Brandon (Brittany) Prior, Dylan Prior, Tom (Kelly) Adams and Nick (Tasha) Adams, his great grandchildren, Cooper and Tucker Kaminsky, Brooklyn and Knox Prior and Maggie and Atlas Adams, his siblings, Edna Reed, John Prior and Linda (Jim) Jones, his step-sister, Maryann (Kent) Jacobs, his step-brother, Don Cochrane, his brother-in-law, Ralph Armstrong, his sister-in-law, Mary Prior and his step-sister-in-law, Linda Cochrane. He was a dear uncle, cousin and friend to many. He was preceded in death by his son, Ronald Prior, his parents, Harl and Rema Prior, his step-mother, Ruth Prior, his siblings, Charles Prior, Ferrell Prior, Josephine Armstrong and Harl Dean Prior, his step-brother, Gene Cochrane and his brother-in-law, William Reed. Memorial visitation will be held on Monday, October 28, 2019 from 4-7 p.m. at Leesman Funeral Home in Dupo, IL. Memorial service will be held on Monday, October 28, 2019 at 7 p.m. Graveside services will be held on Tuesday, October 29, 2019 at 10 a.m. at Valhalla Gardens of Memory in Belleville, IL. Those wishing to attend are asked to meet on the parking lot of Leesman Funeral Home at 9:30 a.m. on October 29, 2019. In lieu of customary remembrances, the family requests with gratitude that memorial contributions be directed to the charity of the donor's choice. For more information, please access our website, www.leesmanfuneralhome.com. Arrangements were handled by Leesman Funeral Home - Dupo, IL.

The family of Alfred Lavern Prior created this Life Tributes page to make it easy to share your memories.

Alfred Lavern Prior, 85 years of Dupo, IL, passed away on October...

Send flowers to the Prior family.